Close your eyes and picture this.

You are in a lush green garden. Small smiley gnomes dot the landscape. A scarlet breasted bird perches atop a rustic bird house. Below, a rabbit peeks shyly out from a charming fairy house. Nearby, a vintage Little Red Riding Hood figurine stands sentry. Suddenly you spot a shiny fish gliding overhead by a stained glass window. Wait, what?! Literally a fish out of water! Are you dreaming?

Nope. You are gazing at one of Claudia Lambdin’s dreamy paper collages: a visual tapestry of disparate images that somehow, when arranged together, make perfect sense.

“Collage is a wonderful, whimsical way of expressing myself and my spirit,” says Lambdin, an Auburn artist and crafter who returned to the artistry of collage in 2017. 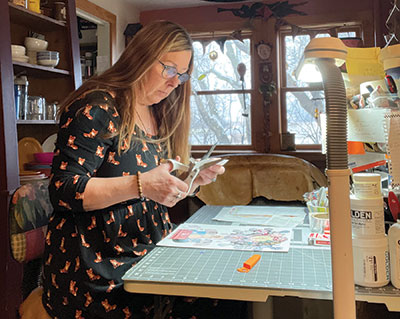 Lambdin at work at home

Since then, by her own count, she has produced over 500 works. Each is a seamless kaleidoscope of animals, birds, nature, food, objects and architecture. And while each is one-of-a-kind, they all share one commonality: there is always a fish in the mix. It’s both her signature and her spirit animal, guiding Lambdin through her intuitive process of collage making. Plus it’s always fun to find the fish in her compositions!

“Her style is whimsical and imaginative. It is incredible and fun. Sometimes it’s serious with such purpose but mostly it is just fabulous and a reflection of herself,” says Skaneateles artist Georgia Yokum who owns several collages, including a custom piece created just for her. “I always joke with people that I have more of her art in my home than my own.”

Lambdin, one of six siblings, grew up in Lowville, and later Fulton. Her parents, of the Depression era, were thrifty and crafty. “My parents brought us up to be conscious of recycling and reusing and to do our part in the world,” she says. As a child, Lambdin made artistic and functional items from found objects and nature, explored a variety of crafts, painted with watercolor and acrylics, knitted, and created collages. As a teenager, Lambdin completely covered her bedroom walls with collage much to the consternation of her parents. Although she was normally encouraged to express herself creatively, this was a bit too much!

Lambdin attended Oswego State University but left before graduating to work with people with mental disabilities. She was eager to pursue a career that would make a difference. In 1984, she met her future husband Tom Lambdin when they both worked at the Lexington chapter of The Arc New York. She went on to work as a substance abuse counselor at another agency while Tom completed his Master’s of Computer Science degree.

They married in 1987 and bought their dream house, an 1826 cobblestone in Lyons. Lambdin enthusiastically set her sights on restoring their home to its original glory. After taking historic arts classes and joining the Historical Society of Early American Decoration, she focused on home design projects such as painting murals, reverse glass clocks and stenciling walls – all meticulously executed in period style.

After their daughter Allison was born in 1997 and then Mary in 1999, Lambdin stayed at home with their children. Her creative energies were directed to imaginative projects and crafts with the girls. The family re-located twice after Lyons for Tom’s career as a software engineer. In 2001, they moved to Auburn where the couple still lives.

While Allison was attending New York University in 2017, Lambdin visited and they went to The Guggenheim museum. After viewing Marc Chagall’s famous Paris through the Window painting, Lambdin was inspired to return to making collages. “I loved the colors, the whimsical feel, the animals, things upside down,” says Lambdin. Her daughter later surprised her with a print of the painting. “I was off on a mission. I knew what I was supposed to do. I guess you could call it a spiritual intervention because I have not stopped yet.” She believes that God lead the way.

Lambdin took a deep dive back into collage and quickly amassed a large body of work. She named her burgeoning business Ahjnae Collage. “Ahjnae” is the phonetic pronunciation of Ajna, one of the seven chakras which, in Hinduism, are part of a connected energy system within the body. The Ajna Chakra, also called Third-Eye Chakra, is the center of perception, consciousness and intuition. It’s a fitting description of Lambdin’s intuitive process of selecting unrelated images that come together in surprising, unplanned harmony.

“Claudia’s work has a mystical quality to it. I have watched her work and she never has a preconceived notion of what she is going to do,” says ceramic artist Terry Askey-Cole, one of the owners of Gallery 54 in Skaneateles where Lambdin’s work was sold.

Gallery 54 began representing Lambdin in February 2018 after another owner, potter Sallie Thompson, brought her collages to the attention of the other owners. Lambdin was featured in a solo gallery show later that year – impressively early in her new art career. More recently, The Purple Painted Lady shop in Palmyra began to carry Lambdin’s work and her collages were the focus of a month long exhibit this past February at The Art Store in Syracuse.

In January 2020 Lambdin launched her own website. The couple also purchased and renovated a small house near their residence to serve as Lambdin’s gallery, which has space for workshops and accommodations for artists-in-residence. The Covid-19 pandemic dashed most of her plans for opening the gallery up to the public and other artists but on May 21, 2022 Lambdin is finally hosting an open house at her Little House Gallery. Her artwork will be on sale and Lambdin will demonstrate her collage techniques. Visitors can also enjoy sweet treats by Sundaes Best and live music by Merlyn Fuller.

Lambdin’s collages start with an inspiration image. In The Magic of the Forest, the Little Red Riding Hood figurine directed the rest of the piece. An 11-by-14-inch sheet of watercolor paper is placed in a tray and Lambdin begins to leaf through a stack of recycled magazines and books, many of which are given to her by friends and family. She may have the television on or music playing as she cuts out images that intuitively appeal to her, working with two to three different trays at a time.

Once a number of images have been chosen, Lambdin arranges them to see if they work well together. If not, she sets it aside for another day. A collage can take hours to days to complete. If the selected images click cohesively, Lambdin uses a permanent glue stick to make a new collage which always includes her signature fish.

Lambdin shares new works with an informal focus group of family and friends which includes her husband and daughters. Their feedback helps determine which pieces have more universal appeal and therefore may sell better. This would merit making additional prints from an original collage.

08/09/2019 Military reenactors representing American soldiers from the Revolutionary War to World War II will gather to create a Living Military Timeline on Saturday,…