Pioneer of abstract art in America has roots in the Finger Lakes.

As Jim Spates ascends the winding staircase that leads to the third floor of the Dove Block in downtown Geneva, he likes to imagine he is following the footsteps of Arthur and “Reds.” The Arthur that Spates is thinking of is the 20th century American artist, Arthur Dove, and “Reds” is Helen Torr, his artist wife. When the couple lived in Geneva in the 1930s, the top level of the large commercial building became their home and studio for a period of time. Now, Spates and Dave Bunnell have been engaged in raising awareness of their Save the Dove Block project. For nearly three years, the efforts to revitalize the building with its fascinating link to modern art and Geneva’s history appear to be paying off.

It was while Spates was walking downtown in 2015, a year after his retirement from a distinguished teaching career at Hobart William Smith Colleges (HWS), that he took a long look at the dark and empty building. The red brick structure was built in 1878 by Arthur Dove’s father, William G. Dove, a successful contractor and brick manufacturer. The words, “Dove Block” are inscribed on a rectangular block centered in the cornice of the building’s Exchange Street façade. “Wouldn’t it be terrific if it was living again?” Spates recalls thinking. He was struck by the structure’s size, its Victorian-era architectural style, and prime location on Castle and Exchange Streets at what he calls, “the most important intersection in the city.”

“I like cities,” explains Spates, an Urban Sociologist who taught at HWS for 40 years. The longtime resident of Geneva believes a restored Dove Block would contribute to a city renewal. Over its 140-year history, the structure hosted an assortment of occupants, although it has been vacant for more than a decade. Its nearly 13,000 square feet accommodated a succession of businesses on its first floor. The upper two floors served variously as an auditorium, a National Guard drill hall, a roller skating rink, a gathering space for professional wrestling and boxing matches, a radio station, a dance hall, and the Salvation Army. In the 1890s it even became a destination for opera and acting troupes as “Dove’s Opera House.”

Arthur Dove, today an internationally recognized artist, has roots in the Finger Lakes region. Born in Canandaigua in 1880, he moved when he was two with his family to Geneva, where he grew up. He attended college at Hobart College for two years and then graduated from Cornell University in 1903. Of special interest to Spates, Bunnell and others is the Dove Block’s use as the artist’s studio over 80 years ago. Dove had returned to Geneva from Long Island to settle his mother’s estate in 1933. Rather than live in the family home on South Main Street, he and Torr stayed in a farmhouse owned by the Doves on the Lyons Road before moving downtown to the Dove Block’s top floor in 1937. Living space was created around the large central space and there was access to the roof with views of the city and Seneca Lake. The couple stayed in Geneva until 1938 and those five years are considered by various Dove specialists to be the most productive period in Dove’s artistic career. Later, Dove and Torr returned to Long Island where they lived for the remainder of their lives in a small cottage overlooking the water. That home, a converted post office, is today on the National Trust of Historic Places.

The Dove Block fortunes began to look up when Spates’ downtown stroll included a stop at the Geneva Neighborhood Resource Center just down the street. Sage Gerling, who heads up that organization, responded to the professor’s interest in reviving the pivotal commercial building by bringing together like-minded citizenry including Matt Horn, the Geneva City Manager.

“It is about two things: saving an important building and memorializing Arthur Dove,” says Dave Bunnell, a building developer who was among those at that first gathering. The Pennsylvania native and lawyer had a strong background in business and real estate in Texas and Minnesota before arriving in the Finger Lakes region. He is currently at work on a small resort-type property on Seneca Lake. His renovations include several commercial buildings on Castle Street and residential properties like the Dove family home on South Main Street where Dove and a younger brother, Paul, both lived.

“By the end of the summer of 2015, Dave and I became the ‘self-appointed’ heads of a Save the Dove Block group and, over the course of the next year, we had a series of meetings with those folks who continued to show interest, learned who owned the building and what was needed to get it operating again,” explains Spates. “Geneva is in the midst of serious renaissance and the Dove Block is the linchpin that will kick start other businesses.”

The plan is for new businesses to rent the first two floors. The Hobart and William Smith Colleges bookstore is considered a possible tenant for that space. The third floor will become a museum to honor Arthur Dove and his work. To realize their goals two 501(c3) non-profit groups were created.

Overseeing the purchase of the building and bringing it back to modern standards is the responsibility of the five-member Dove Block Restoration Group board headed by Bunnell as President and Spates as Vice-President. Local lawyer Murray Heaton serves pro bono on this board as do the other members. Currently, an English business woman, Elizabeth Wehman, owns the Dove Block, having purchased it at a tax sale in 2006. While her plan to renovate the building as a center for the arts did not come to fruition, she carried out crucial structural restoration to one wall. Last year, drawing on $200,000 raised by the Dove Block Restoration Group, the owner began receiving an annual rental fee with an option to buy.

Spates heads up the second 501(c3) organization, the Arthur Dove Tribute Group. Its five members include Bunnell as Vice-President. “On this floor there will also be the story of the Dove Block in connection with Geneva,” explains Spates, standing near the center of the vast third floor. Dove reportedly roller skated from one painting to another in the enormous space bathed by natural light entering through numerous tall windows. Someone has tacked up a photocopy of one of Dove’s paintings just to the side of an east-facing window linking the artwork to the skyline view. Opposite, along the solid 60-foot wall, the artist hung 25 paintings in 1938. An image of that remarkable collection has survived in a panoramic photograph.

An elevator will be needed and a climate-controlled portion of the third floor will allow for changing exhibits of original artworks by Dove and other artists like O’Keeffe and Stieglitz. Tentatively to be called the Arthur Dove Center for the Visual Arts, the ample space could provide classrooms for teaching and public programming. Spates says he took on the third floor as an “Arthur Dove” focus because of his strong personal interest in modern art. “The more I learned, the more I realized that, in Dove and his history in the city, we had one of the most important artists of the American twentieth century, a Geneva native who had created dozens of his most acclaimed works in Geneva – in the Dove Block!”

Dove’s artwork can be seen in major museums in New York City, Chicago, Washington, DC, and Boston.  In the Finger Lakes region, his art is found at Rochester’s Memorial Art Gallery and the Herbert F. Johnson Museum at Cornell University in Ithaca. The proposed Dove exhibits in Geneva “will connect Dove with his geographical origins,” says John Raimondi, an internationally known public-scale sculptor who serves on the Dove Tribute board.  “He was a unique American artist and is credited as the first to create non-representational art in North America.” 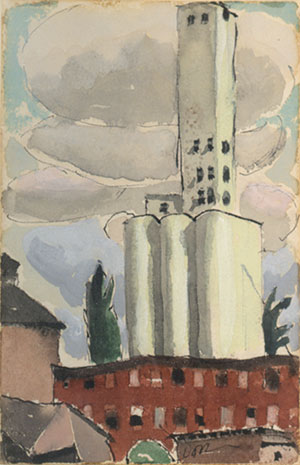 Watercolor by Arthur Dove, no date. This grain elevator was built in 1937 for the Finger Lakes and Hudson Flour Mills (FL&H) when Dove lived in Geneva. Courtesy Geneva Historical Society

“The way you see nature depends on whatever influenced your way of seeing … I think it was Arthur Dove who affected my start, who helped me to find something of my own.”
— Georgia O’Keeffe

After college Dove’s love of art led him to a successful career in New York City as a magazine illustrator and in 1908 he moved with his first wife, Florence Dorsey, to Paris for over a year. He even showed his paintings at the famed Salon. After returning to America the couple moved to Westport, Connecticut, where he painted while farming. Dove’s commercial illustration gave way to a modern style of painting. He exhibited at galleries owned by Alfred Stieglitz, acclaimed photographer and husband of the major American artist Georgia O’Keeffe. He became Dove’s dealer and advisor throughout his life. Dove became friends with avant-garde modernist artists in the Stieglitz circle who espoused abstraction and he is considered by many as America’s first abstract painter. O’Keeffe regarded Dove as a close friend and a major artistic influence, even visiting him in Geneva.

In 1921, after Dove left his wife and son he moved to a houseboat on the north shore of Long Island with Torr. The pair eventually married in 1932 and their primary residence for years was a powered yawl named Mona. Dove devoted himself to his art, thanks to a monthly commission paid by art collector Duncan Phillips. In exchange, Phillips received his choice of Dove’s paintings completed in any given year. Today, the Phillips Collection in Washington, DC owns the largest collection of Dove’s works. 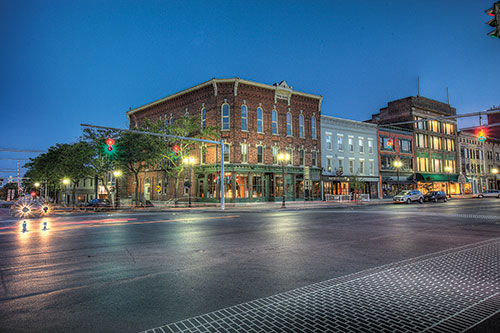 In 2016 the Landmark Society of Western New York selected the Dove Block as one of their “Five to Revive.” The annual list generated by the regional preservation group identifies historic buildings and properties worthy of attention to promote the protection of the region’s architectural heritage.

“We are in a very good place,” reflected Spates at the end of 2017. The Save the Dove Block initiative has now successfully acquired $1.4 million in New York State grants, enough to begin critical upgrades to the building. At the end of December, Geneva received $500,000 in state funds in the latest round of Regional Economic Development Council awards, designated for the project. Added to the earlier $900,000 earmarked for the Dove Block, it will accomplish “the fundamental renovations of the building – making it habitable for our future tenants,” according to Spates. Fundraising must continue, however, as the entire project is estimated to cost $3 million.

Bunnell and Spates believe visitors enjoying the natural beauty of the region, its fine food and internationally renowned wines, will be attracted to the resurrected Dove Block and its tribute to an important native son. The re-opened Dove Block will place Geneva firmly on the national arts and cultural trail, connecting with such significant Finger Lakes destinations as the Harriet Tubman National Historical Park in Auburn and the National Women’s Hall of Fame in Seneca Falls.

To see a video created by Spates about the artist and the building visit savethedoveblock.org. For questions, to get involved, or make a donation, email spates@hws.edu or dabgeneva@gmail.com, or call 315-521-2895. 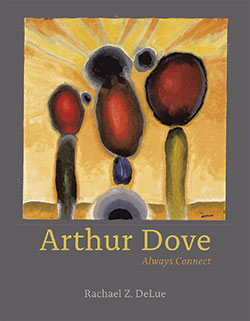 Get the LIFL APP to read Laurel Wemett’s book review about ARTHUR DOVE!