excerpted from “Never Sit on Stone Steps” by Katherine Bourbeau

Mary was raised by her aunts in the house on South Main Street in Geneva. For a year they thought her “too delicate” to go to school, and she was kept at home. She was home so much that she never learned all her multiplication tables, and she fell behind a year in school. She never learned to ride a bike, never learned to swim.

“Babe,” her aunts said to her, “don’t ever sit on stone steps.” They were afraid she would die of a rheumatic heart.

When I was young, I was transfixed by stories my grandmother told me about her childhood. When she shared her memories, she sank back into them; her eyes lost their outward vision and I could see that she was seeing the people and rooms and places that she spoke about, alive for her still. She spoke as if she were remembering the moments for the first time. The sadness and confusion were visible on her face and in her body, which would stiffen a bit as if to protect herself from a grief that was too much to feel.

My father was a restless man who loved adventure, so we moved every two years throughout my childhood, starting over again in new cities and new schools. But we always returned to the home of my mother’s mother in the small city of Geneva in the Finger Lakes of New York State. There I could count on hearing my grandmother’s stories and see the high-Victorian artifacts from the house in Geneva where she spent her childhood: Candlesticks with crystal teardrops hanging down from the candle base, a marble top table with ornate mahogany legs, and delicate china hand-painted with pink flowers and shamrocks chosen by my grandmother’s Irish aunts. In Geneva I could see the actual house where her childhood memories played out, the park where she played as a child, and the sidewalks where she walked with my grandfather in their courting days.

My grandmother’s stories make me think about how we humans endure, how it was done then and how it is now. The youngest of my grandmother’s aunts was rejected by her true love’s family, and married a traveling salesman. It seems quaint and slightly humorous, like the subplot of a play. And yet for me, it also resonates with the compromises we all must make, and the limited circumstances that sometimes cage us.

By high school, Mary had a lot of girlfriends. They liked to take photographs of each other in her yard dressing up and acting out scenes. She pasted the photos into albums, titling the photo “The Stranglehold.”

Back home in Geneva, she ran into her friend Ray Rice on Seneca Street downtown. They had known each other since first grade. Mary had set Ray up with her friend Peggy and he had given Peggy his pin. Mary was dating a Hobart boy from the midwest named Stukenberg. “How’s Stuke?” said Ray. “That’s all over,” said Mary. Stuke’s family had demanded his return home to join the family business and to bring an end to his attachment to an Irish Catholic girl.

Mary’s disagreeable Uncle Jack didn’t approve of her new beau Ray, and tried to drive him away. This led to one of the most outspoken moments of Mary’s life. “If you ever try to interfere again,” she said to Jack, “I’ll kill you.” 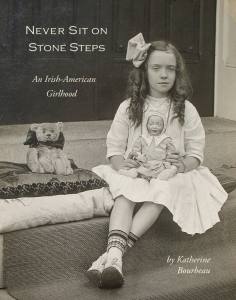