As a regular bicyclist on the canal towpath, I often come across (and talk to) long distance bicyclists. Their fortitude and endurance to travel thousands of miles simply astonishes me—not to mention putting up with the months of a sore butt.

You can instantly spot cross country bicyclists because their bikes sport two pairs of large packs (called panniers) that hold their gear while hanging from and sandwiching the front and rear axles. 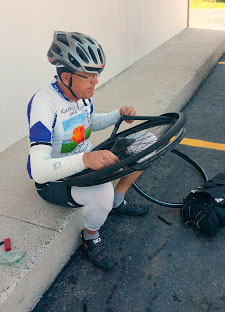 When I spotted an older pair of cross country riders ripping along the tow path on a tandem (built for two) bike, the first thing that came to mind was the sixties movie “The Defiant Ones.” In it, Tony Curtis and Sidney Poitier escape prison and flee across the southern country side pursued by hounds and cops. The hitch is that they are chained together and can’t make a move without one dragging the other along—like a tandem bike, I thought. Where he went, she went. Every day.

They were the first long haul tandem riders I’d come across. I knew I had to talk to them, so I pulled alongside on my bike and asked if I could take their picture canal-side in Pittsford.

Kathy and Roger live in southern California. Retired (and I presume bored) they decided to have an adventure. So they ordered a custom-made tandem bike and headed out. First up the coast to Washington and then east. When I met them, they’d already clocked 4,000 miles over a three-month period, averaging about 60 miles a day, riding about 6 days a week.

So I asked Kathy and she said they couldn’t make up their minds on a route so “We decided to visit friends, family and former colleagues by making a big loop. Kind of a reunion tour.”

I also wondered why a tandem bike and Kathy replied, “We can’t lose each other on a tandem.”

For a good read about their adventures and the dozens of small-town people they’ve met across the country, go to Kathy’s blog: www.takestwototandem.blogspot.com. 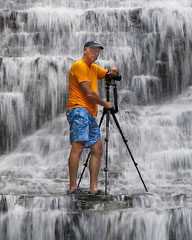