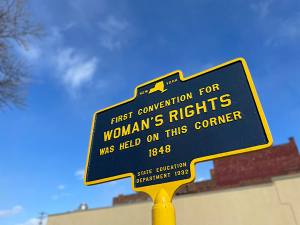 The drive on route 89 is picturesque as I travel north alongside Cayuga Lake from Ithaca to Seneca Falls. In honor of Women’s History month, I’m paying a visit to a town at the heart of the Women’s Rights Movement and the official meeting location for the first Women’s Rights Convention.

Downtown Seneca Falls is bustling as people dip in and out of the local stores, coffee shops and businesses that line Fall street. I move quickly out of the chilly wind that sweeps up the banks from the Cayuga Canal Harbor and into the visitor’s center at the Women’s Rights National Historical Park. 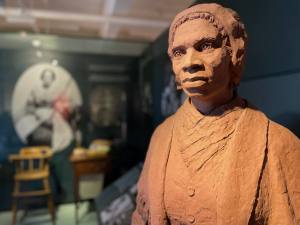 Inside, a friendly National Park Service ranger greets me and quickly shows me around the museum space that spans two floors. I’m excited to tour the exhibits, beginning with an interesting hoard of bronze statues next to the information desk. The piece, created by sculptor Lloyd Lillie in 1993, is called the “First Wave” exhibit. Over twenty meticulously crafted figurines stand, staring solemnly ahead. Nine of the statues are of different pioneers of the first Women’s Rights Convention in 1848 and 11 “anonymous” figures represent the 300 first convention guests.

What began as the call for the equal right to vote transformed into a movement for women’s liberation throughout the 20th century. This timeline of historical, social and political events is displayed in a collage of posters, items, signs and even quilts in the next exhibit, which takes up the entire wall outside the Guntzel Theater. The theater is currently closed due to COVID-19, so I continue to the second floor instead.

Upstairs, the museum is quiet as I follow the numbered path winding through different exhibits that represent topics of U.S. women’s history: including, employment, religion, political influence, sports, fashion, slavery and oppression. At the edge of these exhibits stands a clay statue of activist Sojourner Truth to greet passing guests.

After observing everything on the second floor, I return to the park outside for a brief lecture from a ranger about the first convention. He discusses the main contributors to the convention and the authors of the Declaration of Sentiments. The full document is engraved on a slate wall outside the visitor’s center. The chapel has been restored by the National Parks services, but some of the original brick can still be seen on the west side of the building. 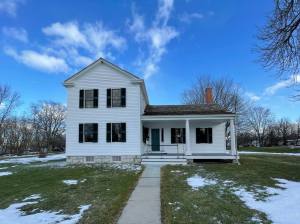 After the ranger talk, I make my way to Elizabeth Cady Stanton’s house on Washington street. The old white house is simple, with a small front porch that faces the canal. Like the Guntzel Theater, the inside of the house is also closed to visitors.

The temperature begins to drop as the late afternoon sun sets, so I don’t stay long before traveling back to Ithaca. Once it’s safe for the Stanton house, Wesleyan Chapel and other sites around Seneca Falls to reopen, I will definitely be back to revisit this fun, historic town.

There were times this spring when we thought summer had come to the Finger Lakes early, only to be followed by the coldest and…