One of the joys of life is when you come across a fabulous natural phenomena while driving through the Finger Lakes. And from dust devils to apple windfalls, there are many to entertain us. But only a few sport a really cool handle.

So which is cooler—the word “murmuration” or the phenomena?

Let’s start with the word.  “Murmuration.” That’s a hard word to top. It sounds exotic, even sensual. Saying it softly makes the lips pleasantly tremble and vibrate; a perfect word to whisper to someone on Valentine’s Day and then to impress them by divulging its meaning (which I am about to do so I hope you’re impressed).

What is a murmuration? Well, despite its sound, it’s not a bunch of sweet nothings being whispered. Indeed, if you spot one you’re likely to let loose a joyful shout.

It’s the name for a large flock of starlings and is most often used to describe a large flock sweeping and swooping across the sky. A good murmuration is truly a sight to behold. Its acrobatic flight formations dazzle and delight. 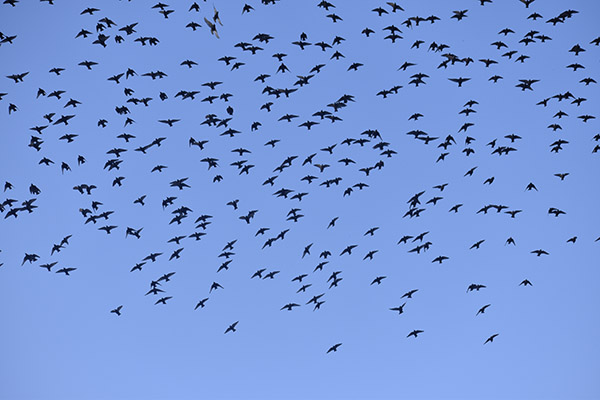 By the hundreds, sometimes by the thousands, the starlings, on some mysterious cue, come together and like some magical, undulating macramé scarf, they weave through the sky, crisscrossing and streaming in ever shifting formations hundreds of feet long. One minute they’re a deflating balloon, the next a rippling ribbon, and then a bell or a boot or some other completely unexpected, incredible sky drawn shape that as suddenly as it forms dissolves into a thousand pieces plummeting earthward only to abruptly and without warning change again as it re-assembles in an upward swirling ice cream cone.

A good murmuration can be mind boggling to see. But while the possibility of seeing such exotic formations exists you may have to make do with a less creative flock. But even the less creative shape shifting is impressive. That hundreds or thousands of individual birds can fly in multiple, often opposing, directions like dozens of interlacing tick-tack-toe puzzles without crashing into each other seems impossible. Yet they do. And they flow as swiftly and fluidly and even as semi-transparently as smoke from a brush fire . 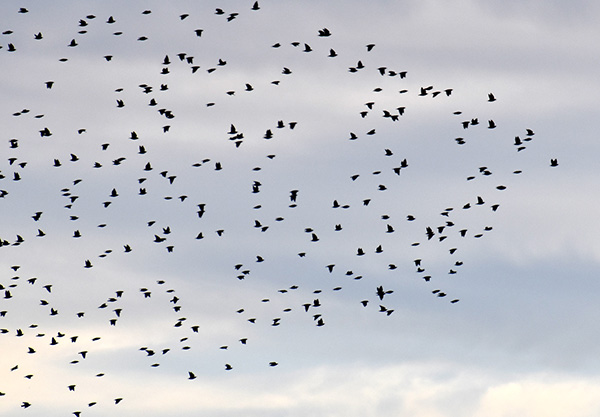 If a large flock flies overhead, first admire it. Then follow it if you have to. But eventually, for just a few seconds, force yourself to close your eyes and try to hear the thousands of shushes murmuring from their wing beats.

These murmurations arise only in the cold seasons—most often from October to early March. Ornithologists believe that starlings gather in huge flocks to protect themselves from hawks.

You don’t have to wait until you come across one. For instant gratification, google “murmuration” and watch one of the youtube videos in your search results.