“There is a fifth dimension beyond that which is known to man. It is a dimension as vast as space and as timeless as infinity. It is the middle ground between light and shadow, between science and superstition, and it lies between the pit of man’s fears and the summit of his knowledge. This is the dimension of imagination. It is an area which we call the Twilight Zone.” 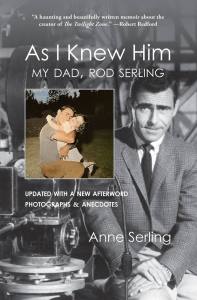 A DAUGHTER’S MEMOIRE
The second edition of Anne Serling’s book, As I Knew Him: My Dad, Rod Serling, was released in May 2021. It is available online, at storefront retailers and at rodserlingbooks.com

I don’t know what I expected of Rod Serling’s grave marker. Nothing elaborate, certainly. I wanted just to see it, mention how much I admired his pioneering work and dwell for a bit on why his writing and his presence were so magnetic. The granite stone wasn’t easy to find, almost hidden. It was flat, but not overgrown with grass. I think it was loved. It’s in G section of the Lake View Cemetery, a tract well in and unmarked at the time of my visit. The gate’s on County Road 150 off 96 outside Interlaken, a Cayuga Lake village of a few hundred inhabitants and a Main Street library complete with a genealogical research room.

The Finger Lakes Region gave us the man who wrote and produced The Twilight Zone television series. And, in many ways, it never let him go. It was with him in Los Angeles in the guise of his production company, Cayuga Productions. And it remained with him here, in a cottage on the west bank of Cayuga Lake, to which he returned every summer, a cottage that remains in the family today. “When we lived in California,” remembers his daughter Anne Serling, “we would fly east as soon as school was out. These were joyful days for my parents, my sister and me. We couldn’t wait to return. It was an opportunity, particularly for our dad, to escape the mayhem and grind of Los Angeles, a place where he slowed down.”

Between profuse oak and maple was a view of the lake. There was a dock. Serling, an avid water skier, kept a motorboat. Boating along the lake to the Taughannock Inn Restaurant was an annual tradition, marking their return. Anne also recalls piling into the boat and motoring across the lake to Hibiscus Harbor for early dinners.

Beside the house was a small cabin where Serling wrote using a manual typewriter – and employing the two-finger method – in the early days, and later relying on a Dictaphone, which allowed him to voice the dialogue. Anne recalls watching “Nightmare at 20,000 Feet,” one of the most well-known of the 156 Twilight Zone episodes, as a child at their lake cottage, built by her grandfather and great-grandfather. “A few years ago, I unearthed a beautiful stone retaining wall built by my grandparents,” she says. “Because I appreciate the skill it takes to create these walls, I was particularly delighted at the discovery.”

Although historians may cite Serling’s award-winning teleplays Requiem for a Heavyweight (1956) and A Town Has Turned to Dust (1958) as the apex of early TV drama, The Twilight Zone remains his hallmark. It tackled issues like prejudice, poverty and nuclear war, baring it in public while cloaking it in genre to avoid censorship. Serling’s fight against the racism of the ’50s and ’60s, and the ensuing contest of wills between him and timorous execs and sponsors was his life battle, a fight in which he was known as “TV’s angry young man.”

Born in Syracuse, Rodman E. Serling grew up in Binghamton, about 70 miles southeast of Interlaken and 50 miles from Ithaca, where his daughter Anne currently lives. His hometown sentiments inspired the classic Twilight Zone episode “A Stop at Willoughby,” while long ambles near the lake inspired “Walking Distance.”

During the latter part of his entertainment career, Serling lectured and taught writing and master classes at Ithaca College, which today maintains the Rod Serling Archives, a notable collection that includes the 92 Twilight Zone scripts he wrote.

The settings, characters and storylines varied greatly, from American westerns to space chronicles, but it was the series’ introduction that unified this eclectic body of work and exemplified Serling’s fine art of writing for the voice, his weighted tenor lulling the TV audience into his personal dreamscape. The introduction began mutating in its first season, when 29 seconds of Serling’s original narration were reduced to 10. Though I may never know for certain, I interpret this as a restless search for perfection on Serling’s part, with a measure of interference from broadcast brass. Lost were the poetic contrasts of the original. But the fourth season arrived with a new introduction, providing a stronger dose of the surreal amid images of a floating door and clock, a breaking window.

The series ended in 1964. Serling died in 1975. His grave marker has eroded to some degree. Others found it long before me – offerings like little rocks covered it, coins foreign and domestic, figurines and painted stones. Strangely, the inscription on the stone has nothing to do with his life’s work in entertainment. It doesn’t reflect him as a father and husband or humanist. It seems as simple as his storylines and as to-the-point as the tales themselves. On the first line is just his name. The second and third lines are “Tec 5, US Army, World War II,” meaning he was a corporal. On the last are the dates of his time on Earth. He was born on Christmas Day and died at age 50, an epitaph as brief as his life.

Serling had trained as a WWII paratrooper, boxed in the Army and was awarded the Purple Heart and the Bronze Star in the Pacific theater. Back home – back here – he was a loving prankster of a father who gardened, boated and relaxed along a lake. When he wasn’t writing, he made model airplanes in his lakeside studio. He was a teacher. He was a modest man, when you consider his successes and his courage.

For me, finding his nearly invisible marker was like catching the twist he put near the end of his stories: unexpected and yet halfway predictable if you knew the man and his work. Still, based on his endeavors in a Cold-War America still tainted by racial prejudice, I’d have to say he was quietly brilliant and brilliantly multifaceted, much like the universe of stars at the end of every introduction through all five seasons. The same stars, misty and unfocused, that he saw rise above the maples and oaks at Cayuga Lake, which you’ll see right before you cross over, into the twilight zone.

The Twilight Zone provided a formula for plot depth and character dimension that changed the television industry.

He played with jazz greats like Benny Goodman, Ornette Coleman, Chet Baker, Stan Kenton and Bill Evans. He’s been described as “the most influential…