The early evening sunshine cuts through the chilly air and casts a warm glow over the fields and valleys of Manlius as I travel to Pratt’s Falls Park. When I arrive at the park entrance, I’m met by a smiling family tossing a frisbee back and forth, people walking their dogs and others enjoying a late afternoon stroll. They all seem to be taking advantage of the extra hours of daylight brought with Sunday morning’s time change. Though the area is closed to vehicles for the season, there are spaces to park outside the park gates and the main paths have been cleared for visitors on foot. 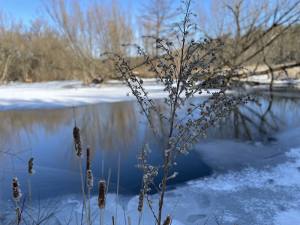 Inside the 300-acre park, I wander between the forests of mature pine trees and wetlands that line the roadway. As I approach the falls on the opposite end of the park, the wetlands open up and a thin stream widens and feeds into a small pond that is just beginning to thaw around the edges. Geese splash and honk noisily at each other from the shallow pools of open water. Cattails and trees that have wilted under the weight of snow sprout from the pond banks and slope forward into the nearly still water. It’s a serene scene compared to the roar of the falls further up the path.

Despite the frigid temperatures, the falls are full of water today. The damming of Limestone Creek in 1796 to power Onondaga county’s first sawmill in this very park created the pond that keeps the falls flowing constantly, even in the dry summer months.

A short bridge over the falls’ crest offers a view from the top of the 137-foot drop overlooking a valley of sloping, snow-covered rocky cliffs and trees. It’s a gorgeous view of the land and river carved out by the gorge, but the best view in the park is at the end of the gorge trail, where the falls’ grandeur can be viewed at its base. 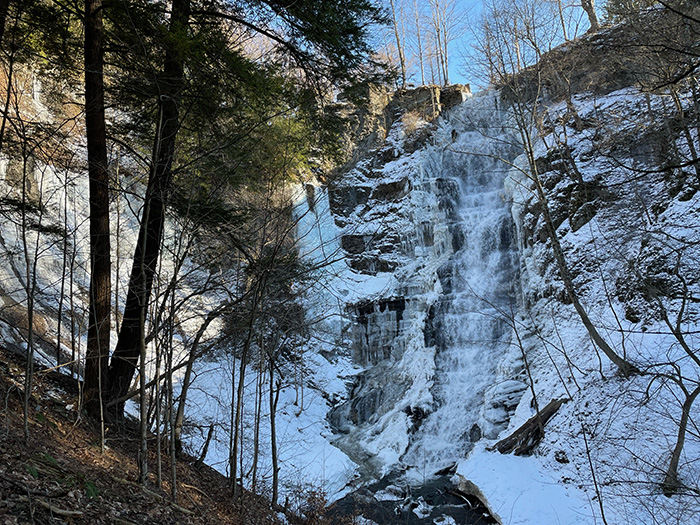 I cross the bridge into the other half of the park, which has short walking trails, open fields, picnic areas and extra parking lots. I follow signs around the edge of the falls to the beginning of the half-mile gorge trail. The steps and dirt paths that lead to the lower half of the falls seem to be more of a summer attraction and are somewhat obstructed by ice and snow right now. I carefully maneuver the trail to the viewing area below. From here, I take in the staggering height of the falls, which are more a collection of cascades over jutting rock ledges than one steady stream. The base of the falls is much wider than the crest and flows in a loud rush into the quick-moving stream current that snakes away from the gorge and into the valley. 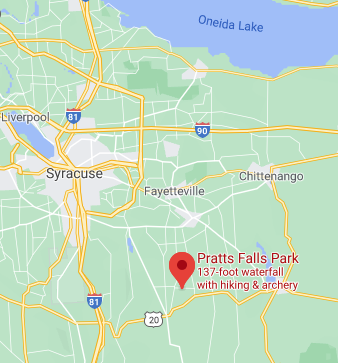 Dependent on the status of the pandemic this summer, this would be a fantastic spot for families to gather and explore the natural spectacles of the Finger Lakes Region.