McDonough has a Christmas tree, That’s lofty and lit with pride.
It’s over eighty feet tall, And forty feet from side to side.
If you haven’t been to see it, It would be worth your while,
To ride through town and take a look, It’s sure to make you smile.
“The McDonough Christmas Tree”
by Jane Sheldon

With its towering presence at the wooded hamlet’s four corners, the McDonough Christmas tree is most imposing as it rises majestically above a cluster of homes and a few steepled buildings. Why is this Norway spruce special, and why have generations of local residents embraced it in their hearts? It has to do with tradition, size, and that hallowed time of year, the Christmas season.

Each year since 1927, local folks have gathered for the tree’s lighting ceremony, a ritual that has brought McDonough families and friends together for generations. On the first Saturday in December, crowds congregate around its ample boughs as Santa arrives (perched atop a fire truck) to join local children in flipping the light switch on the now 115-foot spruce. Yes, 115 feet! The tree has grown considerably since resident Jane Sheldon described it as “80 feet tall” in her 1967 verse. 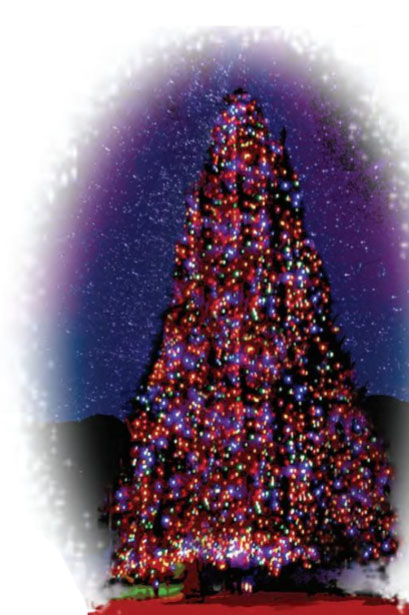 Is it the “world’s largest living Christmas tree,” as touted by some? Not quite. Coeur d’Alene, Idaho puts the “world’s largest” mystery to rest with its own living 164-foot Christmas tree. However, within New York State, no living decorated tree tops the height of McDonough’s unique pride and joy. Even splendid pre-cut trees adorning the centers of New York’s larger upstate cities and towns during the Christmas season never match the McDonough tree in height. What about the glorious tree displayed at New York City’s Rockefeller Center? Though much publicized and brilliantly decorated since 1933, those trees have never exceeded 100 feet tall.

The stately McDonough spruce was planted around 1890. Under the direction of storekeeper Robert Emerson, it was illuminated in 1927 when electricity first came to town. After many years, Emerson’s maintenance efforts were carried on by local postmaster Donald Bosworth and others.

More recently, through the combined efforts of the McDonough Fire Department, the McDonough Improvement Committee (MIC), the Genegantslet Lake Association, and with numerous individual donations, money was raised to upgrade wiring and provide almost 3000 new LED bulbs to enhance the light display. A commemorative monument carved from local bluestone was added and now prominently stands beneath the tree, while the community looks forward to the tree’s centennial lighting in 2027.

Town historian Donna Robb praises the “critical support” of the fire department over the years in maintaining the tradition. “In addition, the tree’s owner Kevin Fritschler, Pat Ford who spearheaded our fund drive and many, many others have always treated our Christmas tree as something very special … a true community project,” she says.

Have there ever been any serious problems? “Not many,” Donna adds. “Occasionally local pranksters have flipped the light switch on in the middle of summer …that’s about it!”

The tradition continues!
This year’s lighting ceremony will take place on Saturday, December 5 starting at 5 p.m. McDonough, surrounded by forested hills and rolling farmland, is tucked just a few miles inside the Chenango County line along County Route 5. It is 15 miles east of I-81’s Marathon exit.