For longtime residents, the magnetism of Finger Lakes territory is undeniable. Those drawn away from “home,” for whatever reason, frequently return. First time visitors are drawn back again and again. The region’s allure is perceptible, certain. Corey and Mark will attest to that!

In 1990, Syracuse native Mark Barriere headed for opportunities in sunny California, but always carried with him images of Skaneateles, the beautiful lake and village not far from home. Corey Bond Bauman was a native Californian, forever busy and content with life in the “Golden State.” Corey had never visited upstate New York, but in 2016 planned a college visit to Syracuse with her daughter. “Don’t miss Skaneateles,” her guy Mark urged. “Stay there – you won’t regret it.” For Corey one glimpse of Skaneateles was all it took. “Love at first sight.”

Fast forward a short 18 months and by chance Corey then had two kids in New York (a son in New York City and a daughter at Syracuse University). The time was right. Why stay in California? By late 2017, with images of Skaneateles in their minds, Corey and Mark had pulled up stakes and arrived. From corporate to retail, both had pursued successful careers in California, but the enticing Finger Lakes environment called for something fresh and new. What adventure would come next?

Home is the nicest word there is.

Corey had years of experience in hotel employment as well as meetings and event management. When she saw an 1835 farmhouse on the market, already operating successfully as a bed & breakfast, something clicked. They acquired the keys in April of 2018 and undertook the huge task of renovating every inch of the historic home. 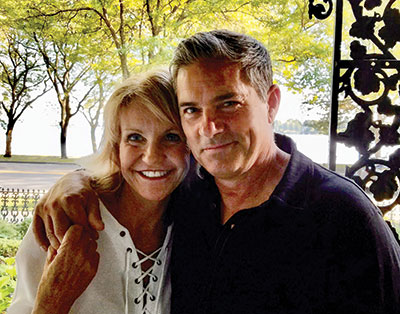 Of course, there were problems to overcome, but worn carpet once removed unveiled classic original floors, scraped wallpaper uncovered rustic old beams. Corey’s vision was to retain the integrity and charm of the structure but add amenities and update the timeworn for the comfort of future guests. Her sense of style, design, and décor was a perfect fit for the task ahead.
Mark? Well, let’s just say Mark acquired a myriad of new “skills” along the way. “Out of necessity things had to be done, so I gave it my best shot!”

Choosing a name for the enterprise, The Bond 1835, was an easy task. The year 1835 is a tip-of-the-hat to construction of the classic farmhouse perched on a hill overlooking Skaneateles Lake. Family name Bond honors generations of Corey’s California kin, including Grandfather Johnny Bond, one of Walt Disney’s original 13 animators.

The Bond 1835 opened July 12, 2018, keeping Corey and Mark bustling ever since, their lives “hectic but gratifying.” Challenging work demands support. They insist on sharing any success so far with their “respected and accomplished” staff of friends and neighbors – “absolutely great people.”

For business needs, they love partnering with the Skaneateles community. Scanning their favorite village shops for everything from baked goods to décor is as much fun as it is work. Fresh local produce, dairy products, and regional wines are staples at The Bond. “We try to incorporate a Finger Lakes touch into everything we do at The Bond.”

Mark and Corey have endeavored to achieve their original goal of “What would we want in visiting a bed & breakfast?” The formula seems to have worked in blending the past with the comfort of up-to-date amenities. They’ve created a charming atmosphere for visitors throughout. Guests are matched to cozy rooms and breakfast is exceptional, along with striking views of Skaneateles Lake at the doorstep. The Bond 1835’s setting is made for relaxation – wooded parklike grounds, a pleasant patio, even an antique swing hanging from a sturdy tree.

Visitors’ comments validate The Bond’s five-star rating. Oft-mentioned plusses are Corey’s “impeccable taste” and Mark’s “ever-entertaining banter.” Guests leave the bed and breakfast feeling their hosts have treated them as they would “old friends.”

Corey and Mark’s life in the Finger Lakes looks bright. They’ve settled into a lakefront home just a stone’s throw from The Bond. Its location allows them to enjoy all that Skaneateles has to offer and affords privacy for their guests. Yet, the hosts remain close enough to be on call if any issues arise. Asked to ponder the future, their answers seem clear. After so many years away, Mark is home again, for good. As for Corey, “Skaneateles is now ‘home’ as well – the Finger Lakes have pulled me in…permanently.”