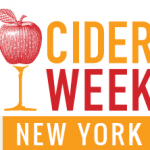 Cider Week FLX is a ten-day festival spotlighting the quality, variety and abundance of cider grown and made in the Finger Lakes. Harnessing the growing consumer interest in cider, the promotion drives agritourism to key farms and tasting rooms, and cultivates appreciation for New York cider in the region’s bars, restaurants, bottle shops and beyond. A full overview of the festival can be found on the Cider Week FLX website, CiderWeekFLX.com.

Cider Week FLX is unique from other cider festivals because the Finger Lakes is an exceptional center of cider making, due to the relative abundance of cider fruit, the presence of Cornell University’s world-class apple horticulture and enology resources, the area’s identity as a winemaking region, and the location of the USDA apple germplasm repository in Geneva.

The entire calendar of festival events is available online at CiderWeekFLX.com/flx/events/. On Sunday, September 30 the action will be at Cornell Orchards, where the “Cider Sunday​” event offers an afternoon of orchard walks, talks from Cornell CALS​ educators and researchers, and a meet-the-cider maker tasting and market in the Cornell Orchards Store​, with a special selection of cider pairing snacks provided by Cornell Catering​. In addition to the hard cider that adults may sample, apple enthusiasts of all ages can taste and make bespoke blends of dozens of different apple varieties, including traditional European hard cider varieties. Finger Lakes cider makers participating in the Cider Week promotion include:

Over the past decade, hard cider has been one of the fastest growing segments of craft beverage, due to factors including interest in farm-to-bottle beverages, drinkers’ general wish for lower alcohol options, and orientation by millennials to drink by occasion rather than category. According to Nielsen Research, small, regional producers such as those located in FLX have been the strongest performers of recent years, with an off-premise sales growth rate of 30% in 2017.

Despite this expansion, drinker familiarity with cider remains a work in progress, and so the New York Cider Association (NYCA) works to give it increased exposure. ​NYCA Executive Director Jenn Smith said​, “Cider is an important part of New York’s farm-based food culture. Drinkers are still learning that premium cider, made from New York apples, is being grown and fermented right in their backyard. Cider Week has been very effective at educating people about cider, upending misconceptions about cider always being sweet, and underlining the connection that cider has to the orchards where families enjoy U-pick apples in the fall.”

The outcomes of the FLX festival will be deepened awareness of FLX as an apple- and cider producing region, increased visitation, and economic stimulation based on both tourism and a boost in craft beverage sales.

About New York Cider
With more cideries than any other state (90 and counting!), a thriving apple industry, historic orchards, and a reputation for being the source of quality craft beverages, New York is the national cider industry frontrunner in terms of quality, scale, reach and economic impact. New York Cider Association works to advance that leadership, with the twinned objectives of developing New York Cider’s market position and strengthening the viability of the New York cider industry. To learn more visit ​newyorkciderassociation.com​.

About Cider Week New York
Cider Week was launched by Hudson Valley-based sustainable agriculture not-for-profit Glynwood in 2011 as a way to connect trade professionals to farm-based cider producers in the region, while also increasing public awareness and appreciation. Now produced by the NYCA, Cider Week has grown from a series of marketing events for producers and retailers occurring in New York City and the Hudson Valley, into a series of four regional festivals throughout the state. To discover other cider weeks, visit ​ciderweeknewyork.com​.

Community Support
NYCA’s production of Cider Week FLX is possible thanks to the contributions of our sponsors, all important members of the regional cider community: ​Cider In Love, Finger Lakes Cider House, Goodnature, ​and ​Vance Metal.

In the upcoming January/February 2020 issue of Life in the Finger Lakes, we explore some of the various waterfalls that can be viewed safely…